Having the roof replaced is a big deal and no doubt, a considerable expense. But there is no reason to delay the roof replacement for the day it will leak. It’s much easier if you get a new roof when the existing one has completed its expected lifespan or starts showing signs of serious damage. Bu then again, not all problems are indications for the replacement of the old roof. Sometimes, all you need is roof repair.

Before we emphasize on the usual signs that indicate it’s time to get a new roof, let us make a distinction. When it comes to getting a new roof, you actually have two choices.

a.       Re-roofing: that’s when you have new shingles installed over the existing ones. But this is possible when the old shingles are in no way damaged.

b.       A full roof replacement: this is vital when damage leaves you with no option but have the existing roof stripped down to the sheathing and a new roof installed.

Common roofing problems or reasons for getting a new roof

The roof is old

There will come a day when the roof will reach its rated life and even if the shingles are not extensively damaged, their age will show in the near future. Most roofs last for about 20-25 years. Now, what’s interesting here is that if you have re-shingled the roof before, the lifespan will be shorter. And that’s the main distinction between replacing the roof and re-roofing. The shingles span is reduced by an average of 30% with re-roofing.

The shingles are damaged or missing

The roof is leaking

If there is a leak in the house, you need a roofer to check the reasons why this happens. Although this might be a sign for roof replacement, it is often a fixable problem. The roofers check if there is warping or mold and the overall condition of the roof and they can often fix damage, if it hasn’t expanded.

Moss growth on the roof

Moss on the roof is bad news. It’s often a sign of trapped moisture and thus roof problems just around the corner. Although a roofing contractor might be able to remove the moss, the roof must be soon replaced if moisture already has taken its toll.

Sometimes, roof damage is seen from indoors. If you go in the attic and notice moisture or warping, it’s vital that you call a roofing company to assess the situation. 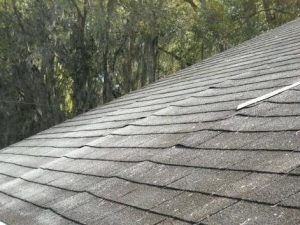 There is no doubt that a sagging roof is a clear indication for replacement. This problem is nearly as serious as dealing with a broken roof that allows sunlight and rain to enter the home. Pointless to say that in the case of the latter, the replacement of the roof is urgent. If the roof is sagging, you still need to get started with the project before you deal with worse nightmares.

Unless your roof is completely damaged, there is often a window of 2-3 years before you replace it. Remember that not all problems call for replacement. Quite a few problems are fixed with roof or even flashing and gutter repair. You can always reroof instead of replacing the whole roof but that’s wise to do only when the shingles are still in good condition and you just want to enhance the curb appeal of the house.